Please reply here if you are interested in purchasing, or e-mail me at sugar0coated [AT] gmail [DOT] com. 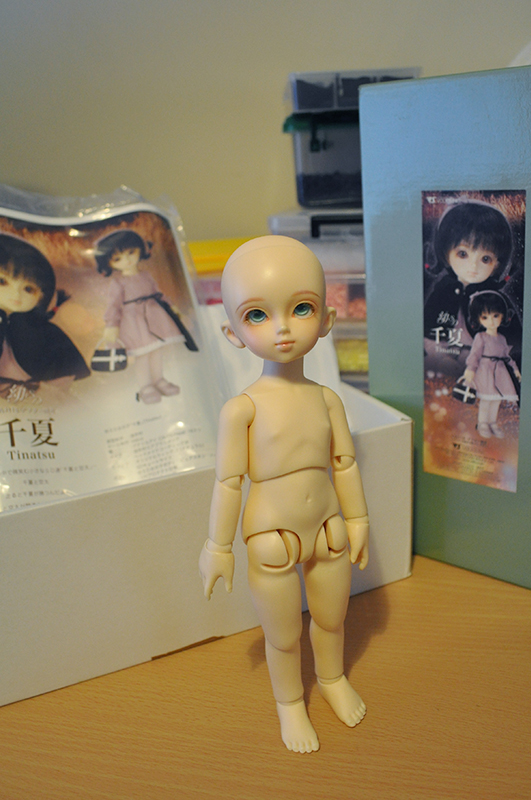 I have for sale a YoSD Tinatsu/Chinatsu head on the (genderless) body of a YoTenshu Yuki, making this doll a same-company hybrid. Both dolls that went into making this one were bought from Den of Angels in probably 2008 or so? Both were new dolls when I bought them. The factory acrylic eyes were removed flawlessly by me, and the doll still retains the Volks company factory faceup, original eyelashes and metal head plate. While I can't really speak for yellowing as I don't have another Volks doll to compare with, the doll has been kept strictly out of sunlight and has been stored in its box since around 2010. The resin colour has remained uniform in tone.

The doll has no damage, however, the magnets on the back seem to have been set very close to the surface of the resin. My other past YoTenshi dolls had similar backs. While they are sturdy and feel smooth to the touch, I thought it worth mentioning. As far as I can tell, the doll is otherwise pretty pristine. As this doll is more than a decade old, it may be time to replace the elastics, as it still has the same elastic it had when first shipped from Volks in Japan, although they don't seem frayed or damaged in any way currently.

The box itself has brown tape, mostly along the bottom and some minor storage wear. I have the official papers in their original packets from Volks from both YoSD Tinatsu and YoTenshi Yuki, both of which I will include with this sale. I will also include a face protector to ensure the makeup stays in good shape in shipping.

I have a pair of Type #1 YoTenshi wings in Sakura (pink) that I will sell as an extra for $50 USD. These are NOT available separately so please don't ask! Let me know if you'd like to add them! They originally cost me around $100.

I am NOT open to splits on this doll. 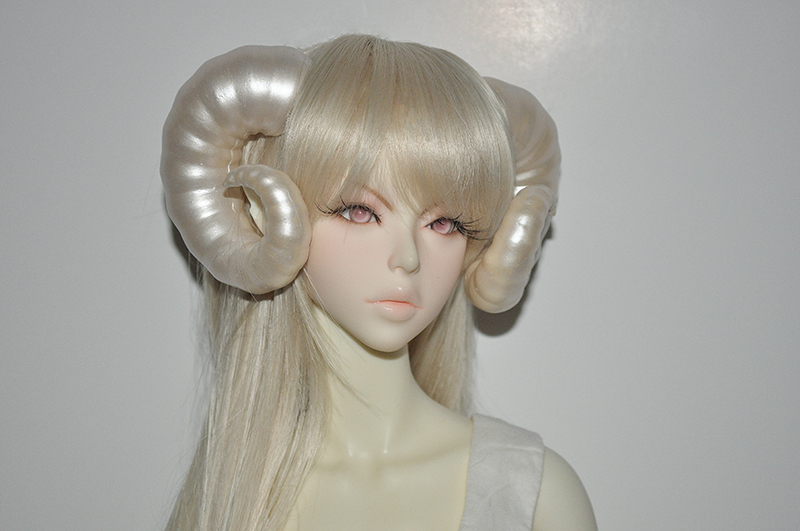 This doll was a huge labour of love to build, and took me several years to gather parts and have painted, starting in around 2008. I've come to the realisation that I'll never afford to finish this doll the way I wanted to, so decided some time ago to sell her instead of continuing. All parts are in Soom's original "cream white" colour. I've listed the parts and their provenance for ease~

This doll was modified by me.
Human Body: I sanded the seams, most of which are now invisible, however there are some areas where seams are still slightly visible due to inexperience mostly. I also lightly sanded the nipples so they are more subtle and don't show through so badly through clothing. The elastics are set for the fantasy hooves rather than human (which would need to be shorter), but honestly, the buyer may think it is time to replace the elastic at this point, or string it tighter, as she does feel quite loose.
Hooves: [Front] [Back] I sanded the furry part on the lower leg and the furry part on the actual foot to make the effect a little more subtle and to my taste, also carved and sanded some of the fur parts deeper at the back. This isn't perfectly neat at the back, and they do have some paint residue, but as far as I can tell, it all looks good from the front. Inside the lower-leg part, I've used PVA to glue black foam pads to the inner joint. This both aids in movement and standing really effectively, and also keeps the joint from rubbing too hard on the hoof. I painted the lower hoof part with artist acrylics and shimmery craft glitter. This paint is FolkArt 659 Metalic Pearl White. By now it may need a touch-up, but as I no longer paint or modify dolls for health reasons, I will leave it to the buyer to do. I also lightly blushed the furry parts on both pieces with grey soft pastels. All pieces were sealed with Mr Super Clear UV Flat.
Horns: I also painted and sealed the horns in the same materials that I used for the hooves. The paint is definitely in need of a touch-up/redo.
Head: [Front] [Back] An accident caused the doll to fall and break the corner of her right ear. The break was very clean and I was able to use PVA to glue the piece back on, which can't really be seen from the front/with a wig on, but can be seen from the back if you're looking for it, as it's slightly shiny and visible where I put the blue. The paint from the faceup is also chipped on both ears. I'll get a picture of this soon. The original artist of faceup stopped taking commissions so I was never able to get this repaired. Face-up is otherwise intact, with beautiful black lashes. I will send the doll with a face protector. Please note that the head was never sanded, and still has seams. Another note about the head - I didn't glue the magnets for the horns inside the headcap. They are simply held on with blu-tak. So if you want to move the locations of the horns (or remove them altogether!) it will be easy to relocate the magnets yourself :). I used strong neodymium magnets so the horns will attach well even through a wig.
Arms: In around 2012 or so, Soom sold replacement double-jointed arms separately to bring them in-line with their other lines. I bought these and will include them along with the original arms the body came with. I can't detect any colour difference between the original and newer parts, although they have looked slightly different with flash in some photographs. I actually got incredibly lucky in that all the pieces I used have an extremely close match to one another in person, despite their varied purchase dates!

This doll was my dream doll, but I just don't have the talent/funds to finish her, and I no longer really have an interest in the project. The price reflects both the rarity of all parts of this doll, and the difficulty in putting it together with all the modifications and paintwork. I am not interested in selling her unless I can get the full amount that I am asking. As far as I know, this is the ONLY legitimate Cuprit with this unique set of parts and in the original cream white colour for sale, and has been for years. Please note that I am in NO way looking to split her up. Her parts are a set, as far as I am concerned, and I will not entertain offers for only her head, for example. Offers to split her will be ignored.

As far as yellowing is concerned, I think this doll has only yellowed very slightly, evenly and nicely. Aside from a couple of meetups, this doll was kept out of any sunlight, and displayed in a low-light room. While the colour is most definitely not as paper-white as when the parts originally came, they are a very pleasant and even cream tone throughout. I can't really picture any substantial differences between the parts in person, they all match exceptionally well given they were manufactured at vastly different times.

I don't have any papers for this doll, as all pieces were gathered from different places :( However, with the parts I've mentioned that were direct from Soom, I can probably dig up my old receipts from the original orders (Heliot parts, arms etc.). I can MAYBE dig through my posts/PMs on DoA to try to find the sellers of the other parts too, but please know that given the age of these parts, this will take time and I might not be able to find them for everything! I do have a posting history on DA and DoA with this doll to prove I've had it a long time, however.

Given the value of this doll, paypal fees are going to be high, so I will accept a bank transfer for buyers in the UK, and I'll also agree to an in-person meet if the buyer can meet with me for an exchange (I am located in Leeds, West Yorkshire, but I'll travel further to exchange if you can cover my train fare).

The doll is very heavy and potentially costly to post. Please keep this in mind. Depending on the buyers preferences, I may disassemble her in order to reduce the size of the boxes and secure her better. I don't think I have a doll box I can send her in - please keep this in mind. If I need to send the doll assembled, it will possibly be done with the doll curled up and mummified in bubblewrap rather than laid flat.

Again, I am NOT open to splitting this doll up into parts! 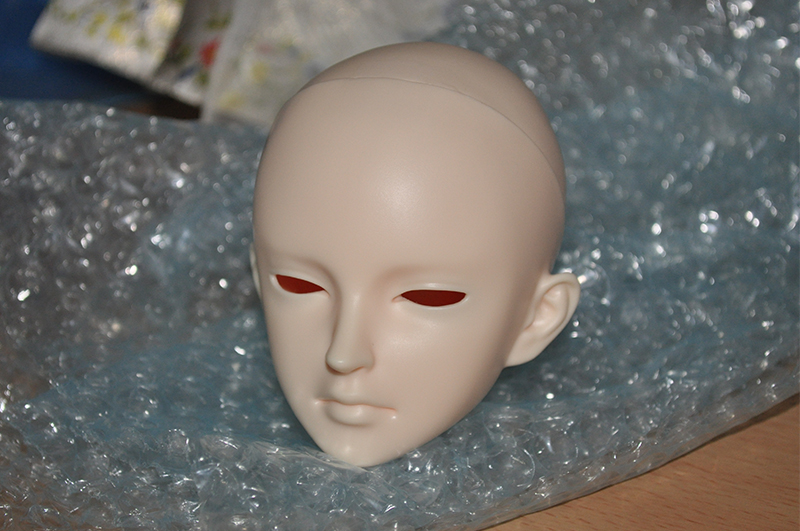 (Distant Memory) Esthy Peroth Head, Normal Skin - $150 USD
Pictures:[x] [x]
To be quite honest, this was a complete impulse buy as I had admired this doll for a long time. As such, I've never done anything with it at all, and it has never been painted or placed on a body. In absolutely pristine condition and kept out of sunlight, wrapped up in a box. I believe this is from the second release in 2013. SD sized, and a pinky resin colour. 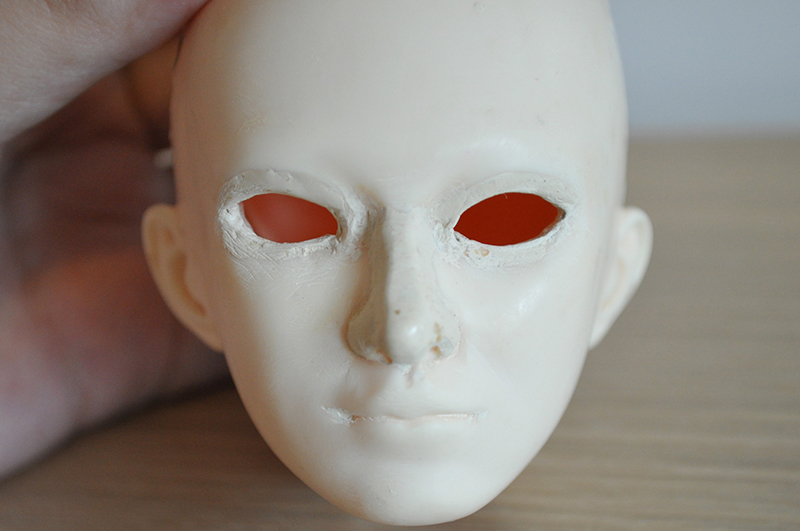 Doll In Mind Minimee Junk Head - $30 USD
A planned project I never got around to even starting. The previous owner already modified this head a whole bunch, to the point that it's unrecognisable from it's original sculpt. I won't list all the changes I can see, you can judge for yourself from the pictures. Lots of residue and messy bits of whatever clay was used for the work. The headcap magnets will need reattaching (but they are included). Ideal for a project head.

Picture Soon
Soom Sard Horns, Cream White - $85 USD
I am the second owner, the first was a DoA member. They've never been painted, and magnets have been attached via hot glue. I bought this for a project but ultimately decided to go in a different direction, therefor, I've never used them. At this time, I don't know where my magnets are, so they will come with only the magnets that are already in the horns. If I find them, I'll include a pair to go inside the doll's head to attach them with though. Double check with me if you need them.

Picture Soon
Leeke Goral Horns Size S - $25 USD
I used these on one of my long-sold dolls, so here is a picture for reference. They were painted in Games Workshop chestnut brown paint, I think? Sealed with Mr Super Clear UV Flat.
Tags: #1, doll, for sale, sale, sales
Subscribe
Comments for this post were disabled by the author